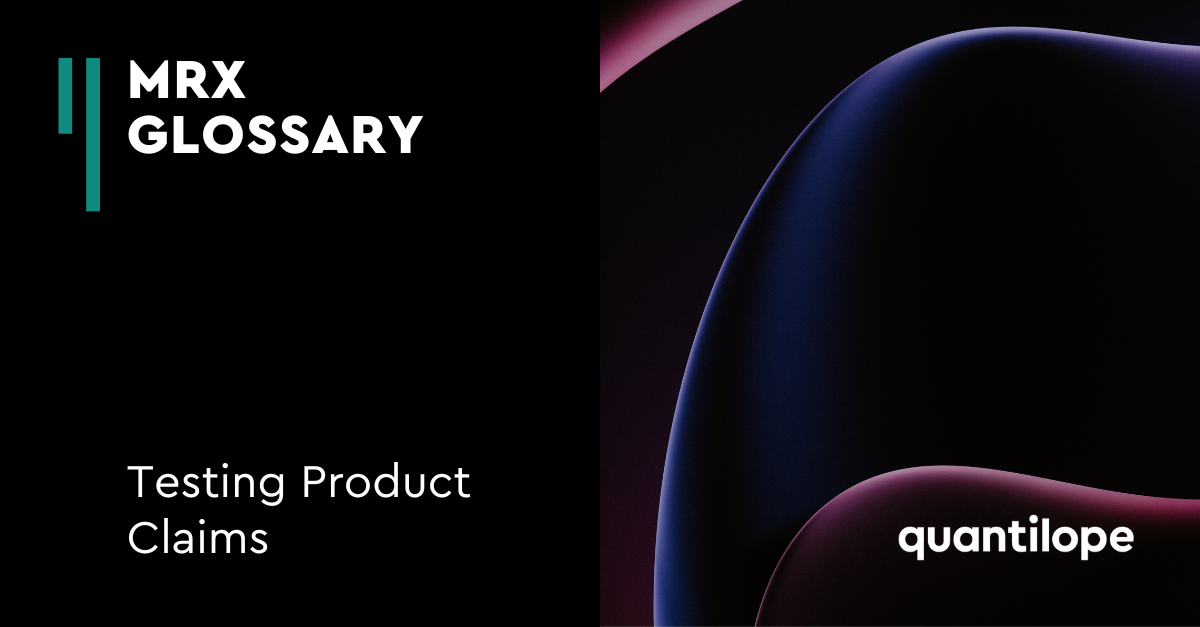 All products boast claims of how they will improve buyers' lives - from making their teeth whiter to mowing their lawn more easily, delivering a superior coffee-making experience, and so on. But which claims should a company focus on in their communication, and how should they be worded?

In this blog, we’ll look at how to develop and test claims that will make products stand out from the rest.

What are product claims?

Products differ greatly in terms of the benefits they offer consumers and the way they make consumers feel. Even within certain categories, there is a wide range of functional differences that products have - think electronics, where product claims often revolve around capabilities and features (i.e. ‘unbeatable image definition,’ ‘ultra-fast processing speed’, ‘100% noise cancellation’, etc.). There also can be minimal variation in the functionality of products within a category - like body soap, for example - so that product claims tend to focus on the experience of using the product (i.e. ‘bringing you the ultimate spa experience’). In other cases, product claims are a mix of both functional and experiential claims.

Whatever the claim type, the point of product claims is to differentiate a company’s offer from the competition’s and grab the attention of the buyer. Why should a consumer choose your TV/pet food/snack over all the other options that are available to them in the category? This is the role of the product claims — they have the opportunity to persuade consumers to opt for yours through communication, product package labeling, advertising messaging, social media endorsements, and other forms of advocacy marketing.

What is product claims testing and why is it important?

Claims testing is the process of checking that claims ‘work’ before they are launched on a package or in the media. By ‘work’, we mean that they motivate consumers to investigate a product, maximize intention to purchase that product, and are in line with the product’s branding and overall business goals.

Claims testing captures consumer feedback as a way to ensure a brand is leveraging a great claim rather than a good one. Part of testing is realizing which keywords resonate with consumers and how often to use them. Small variations in the wording of a claim can have a major impact on its effectiveness in the market.

A further consideration - particularly in scenarios where a product is stated as being better than competitors in some way, or where the industry is regulated by strict claim standards (i.e. health benefits or health claims in pharmaceuticals) - is whether the claims made are legally accurate or not. In these cases, claims testing also needs to involve checks with industry experts,  regulatory bodies (such as the FDA or the FTC), or an organization’s own legal team.

Testing a claim before it goes live is important because any business wants its claim to be both impactful and free from negative feedback. The difference between a claim that appeals to consumers and one that falls flat can create massive problems for a business; it ultimately affects profit levels and the survival of the product itself. Not to mention strong product claims also appeal to retailers, who want to prioritize shelf space for the products that will most obviously tap into consumer needs - something claims testing can validate or disprove.
Back to Table of Contents

So how do you determine which claims stir the most interest amongst your target audience, thus enticing them to buy?

There are several research methodologies that are well-suited for claims testing. Among the most effective are MaxDiff, TURF, and A/B Testing.

MaxDiff is a great method to use when there are many claims or elements to test and you want to establish a hierarchy of preferred claims. In contrast to surveys that ask traditional ranking questions, MaxDiff forces respondents to make trade-offs between a group of claims, emulating the authentic behavior of consumers when making a purchase decision. A MaxDiff can test a large number of claims at once among one group of respondents, making the methodology cost and time-efficient. At the end of the research, you'll know which claims are most likely to drive the desired outcome through a rank order. Also, seeing the hierarchy that the claims fall into also allows one to analyze for patterns — do the top claims all have mutual phrasings or keywords? Do the claims that perform poorly have commonalities? These types of learnings can benefit the team when developing future claims as well.

TURF (Total Unduplicated Reach and Frequency) is as rigorous and efficient as MaxDiff, but in contrast, it excels at exploring what combinations of claims will affect consumer behavior. By using TURF, you'll understand which claims reach consumers, and how many more consumers you will reach by using two claims in conjunction with each other (without duplicating the reach of the same consumer). In short, TURF helps determine how many claims to show together and which claims should be included at all.

Lastly, an A/B test is another great option for claims testing.  While not the most sample efficient when testing a large number of claims, the benefit of an A/B test is that brands can gather an array of customer feedback that help provide context as to why certain claims are liked and others are disliked (along with providing direction on how to optimize top claims).  An A/B Test is a great methodology for exploring claim relevance, uniqueness, believability, clarity, memorability, and purchase intent. It's also great for gathering open-end feedback on the likes and dislikes of a claim (i.e. how to improve the claim's impact on things like relevance, uniqueness, etc., and how to best position a claim in communications or on a package).

A/B testing often follows after MaxDiff and/or TURF research has narrowed down a list of potential claims.
Back to Table of Contents

How to test claims for consumer products

There are three main stages in the process of testing claims.

First, you need to have a number of different claims to test. You’ll need to think about what you want to say about your product: what its strengths are, how it differentiates from other products in the category, and how it makes consumers feel when they use it. For example, if you’re in the business of selling baby food, you might want to point out that it ‘contains 100% natural ingredients,’ is ‘sugar-free’, or ‘contains all the nutrients and vitamins your baby needs.’ You can come up with as many claims as you'd like to test, but there are some key guiding principles to consider when formulating them.

First, the claim should be relevant. In the above example, this might mean highlighting the vitamins the product contains, or indicating that it is a balanced meal because previous market research has found that parents and doctors recommend the included ingredients. It might also mean referencing trends in baby food that the manufacturer knows impact purchase decisions.

Second, the claim should be believable. Saying that you ‘can’t buy any better baby food,’ may be questionable. Contrarily, saying that your brand of baby food has been ‘carefully created by a group of nutritional experts’ could be more believable and reassuring.

Third, the claim must be clear. This means using straightforward and impactful language, making it obvious what the claim means and how it is of benefit to the target audience. ‘Contains vitamins’ might be less clear or appealing than ‘contains Vitamin D for strong bone growth.’

Finally, the claim will stand a greater chance of cutting through the noise in a category if it is memorable. It’s worth looking at the claims that competitors make and ensuring yours is different or termed in a way that makes it stick in consumers’ memories.

Once you have finalized a set of claims, it’s time to test them among consumers representative of your target audience. The best way to do so is to craft and launch a survey - ideally online, as this is the quickest and most efficient way to use one of the market research methodologies mentioned above.

Even if you feel your claims are strong, it’s always interesting at this stage to discover what resonates with consumers and what doesn’t. As Just Spices recalls in a quantilope case study,

“In the beginning, I thought I was 100% sure which feature had to be written on the front of the new product. Surprisingly, it was not voted first by the customers.”

Customers might have unexpected associations with a certain word you have chosen, or you might find that your claim doesn’t fit with a need that the consumer has. Quantitative research can quickly reveal which claims work and which don’t; if you’d like to go deeper into why certain claims seem to be stronger than others, it makes sense to consider conducting qualitative research alongside it. This involves asking consumers to explain their responses in an open-ended, spontaneous, and free-form way, without the restrictions of a pre-coded questionnaire (such as through video responses).

Feedback from the research stage will tell you which claims (and types of claims) resonate with your target audience. It's likely that you'll spot patterns in your claim wording that drive consistently higher scores, and if you're conducting qualitative research, you might even gain suggestions for alternatives to the words or phrasings that don’t work so well. You can then alter the claims to boost their appeal before putting them into another round of research if needed.
Back to Table of Contents

Test your claims with quantilope

Product claims are an essential part of marketing and consumer buy-in, so it’s important to get them right.

quantilope’s online research platform provides a space to test and hone your claims prior to launch. Surveys are launched at the click of a button, and AI-driven automated research methodologies - including MaxDiff, TURF, and A/B Testing make data analysis reliable and stress-free. quantilope also offers templated survey options for those who don’t care to build their own survey entirely from scratch. For those looking for qualitative feedback, quantilope’s dedicated qualitative solution, inColor, allows you to test claims and receive videoed responses from consumers, adding a layer of in-depth understanding to consumer feedback.

All results (quant or qual) are viewable in real-time so that you can start to build on findings as they come in, with full results available in a matter of days. Interactive reports update automatically as respondents submit their feedback, and are shareable across your team with a single URL link.

For more information on how quantilope can help your business build impactful product claims, get in touch below:

Get in touch to start testing your own product claims!

How To Use Market Research To Create a Retail Pricing Strategy

The Path to Best-in-Class Insights

quantilope & AMA Fireside Chat: The Importance of Brand Tracking in 2023