What Is Acquiescence Bias and How to Prevent It 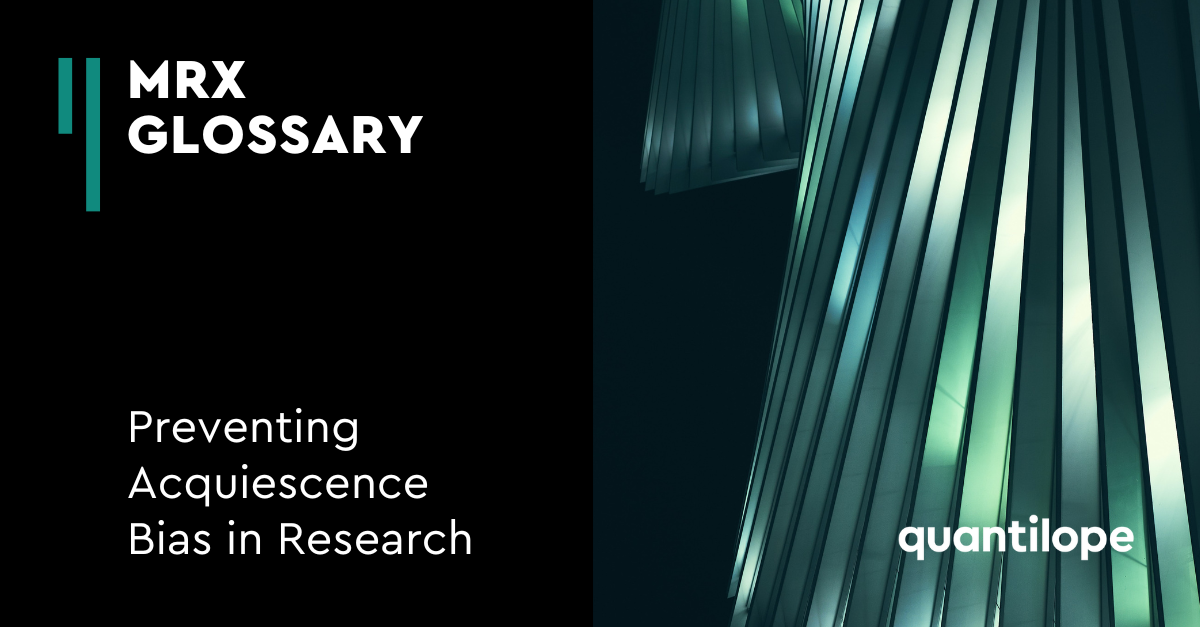 Acquiescence bias is something any researcher will want to avoid in their quest for gaining honest and authentic consumer views. In this blog, we will look at what acquiescence bias is and how to ensure it doesn’t happen in your research studies.

What is acquiescence bias?

Acquiescence bias is also known as agreement bias; it’s a phenomenon in which individuals are likely to agree with something regardless of how they actually feel. In survey research, this is a type of response bias in which survey respondents tend to agree with statements rather than give their own personal, unbiased views. This often happens when respondents are presented with agree/disagree, true/false, or yes/no survey questions. For example, consider the statement “To what extent do you agree with the following statement: I eat vegetables often”. People know that it’s good to eat vegetables, so they would agree regardless of their actual vegetable intake.

Acquiescence bias can be tricky to totally eliminate in a research questionnaire, as its causes are often subliminal and hard to pin down for any given respondent. However, there are several known causes, an understanding of which can help shed light on how this bias can be minimized, if not removed completely. These causes relate to respondent motivations, the survey design, or a bit of both.

Humans (and therefore, survey respondents) are naturally inclined to be agreeable. This might be out of politeness - if they think a negative answer would disappoint the researcher, or it can be cultural; in some regions of the world, politeness/agreeableness is much more the norm than in other places. Some people also have a greater tendency to see other people’s points of view, so they don’t give negative responses that characterize them as narrow-minded.

Lack of motivation to engage in a survey

There are always some respondents who complete a survey because they feel they have to, for one reason or another, but they aren’t fully engaged with the survey’s subject matter or they don’t feel that their answers will make any difference (to the overall findings or how they are used). This can lead respondents to breeze through a survey quickly without giving much thought to their answers. While most platforms or research providers have ways of flagging these respondents when it comes time for data cleaning, it’s up to the researcher to also make sure a questionnaire is fun to complete and engaging enough to prompt authentic answers.

When survey research has anything to do with a respondent’s place in society or how they behave (which much research does), participants are always going to think about the ‘expected’ response. Nobody wants to choose an answer that reflects poorly on themselves, so a respondent might well opt for the answer that makes them look caring, savvy, or positive in some light (similar to social desirability bias). For example, the statement ’we all need to use our cars less’ would elicit an ‘agree’ response even if the respondent does not agree with it, or does agree with it but has no intention of using his/her car less (in which case their response is misleading).

Researchers, whether they are conducting market research in person or have written a questionnaire to be completed by the individual, can have a huge impact on survey responses.

The way questions are worded on a distributed questionnaire can also create an acquiescent response bias. Any question format that allows for the polarity of responses or leads a respondent towards a positive response will most likely bias their answer. Similarly, if respondents have been given information on the study ahead of time, that might sway their responses in a certain direction (e.g. ‘we want to find out how much of a problem alcohol is in the US’) can lead participants to respond in a way that matches the posed question (in this case the word ‘problem’ is suggesting a negative connotation with alcohol). Posing the question instead as ‘We want to find out about drinking habits’ may encourage a more honest reporting of behavior.

Perception of an ideal self

For some respondents, taking a survey is a chance to reinvent themselves - to present a version of themselves that isn’t true to who they really are.

Unlike the above examples of giving answers that respondents believe a researcher would approve of or are favorable in the public opinion, survey respondents who fall into this category are painting a picture of themselves for themselves. This is perhaps to provide self-reassurance that they hold the views they would ideally like to hold or act the way they would ideally like to act.

As well as the country or culture in which a person lives, each respondent’s upbringing and education can affect how they answer questions in a survey. It has been found that the environment in which a person lives can make them more acquiescent - so if there is a high level of corruption or collectivism in their lives, people are more likely to go with the answer that will protect them or the social group they belong to. Similarly, those who haven’t been educated to as high a degree as others can lean toward acquiescence in a survey environment.
Back to Table of Contents

How to avoid acquiescence bias

Knowing why acquiescence occurs can give clues as to how to avoid it, or at least minimize it. Here are some suggestions for creating survey questionnaires that encourage honest answers.

To alert respondents to how much time (or how many questions) they have left, consider including a progress bar at the top of your survey screen. This will encourage respondents to complete the full survey, knowing precisely how much more effort is asked of them. Without this, respondents may not know if they have 5 questions left or 25, which would greatly alter response rates.

Questions that ask a participant to agree or disagree with a statement are more likely to create acquiescence. Instead of wording questions this way, consider an approach that gives respondents a broader range to reflect on how they feel. For example, instead of a statement phrased as ‘I am very concerned about climate change’ (Strongly agree, Agree, Neutral, Disagree, Strongly disagree), consider ‘How concerned are you about climate change?’ (Extremely Concerned, Somewhat Concerned, Neutral, Somewhat unconcerned, Extremely unconcerned). With this change, the word ‘concerned’ is removed from the statement, which could lead respondents to automatically feel they should be concerned to some degree.

As a general rule of thumb, giving respondents the chance to rate on a scale of how they feel makes for more nuanced answers than simply agree/disagree or yes/no; it invites them to pinpoint the exact temperature of their view, recognizing that levels of feeling (and indeed neutrality) exist rather than black and white answers.

Clarity is key. When writing your questionnaire, really think about what each question is getting at and how the respondent will interpret it. For example: ‘How efficient is public transport in your area?’ begs the question of how far a geographical ‘area’ the respondent should consider. Be very specific and include as many details as you can. In this case, replacing ‘area’ with ‘within your zip code’ or ‘within your city’ would provide much more clarity. Another option would be to provide a subtitle or footnote that adds further context to what you’re asking. In the previous example, the subtitle might read: ‘think about efficiency in terms of reliability, speed, and numbers of passengers per vehicle. Consider your area as anywhere within your zip code.’

Providing clear, intentional language is also important so that respondents don’t become frustrated with complex questions and click any answer just to move on. Clearly written questions that don’t require too much thought will get produce the most accurate responses.

As a final note on intentional language, respondents will be more likely to honestly participate in a survey if they know their answers will have a tangible effect. For example, telling them that their answers will help contribute to a better local transport system or climate change policy will encourage them to be truthful.

Open-ended text boxes force respondents to reflect on their views rather than leaning on a set of answer options. This format of response removes the chance of a respondent simply checking an answer box that inaccurately reflects their opinions. An example of a question that would ask for open-ended views would be, ‘What do you consider to be the three greatest threats to global warming?’

Lastly, if respondents are worried that their responses will be traced back to them, they may not answer honestly. Including introductory text to your survey that all responses will be viewed on an aggregated level and totally anonymously will remove respondents’ hesitation to provide the most authentic responses throughout the survey.
Back to Table of Contents

quantilope prides itself on offering reliable, high-quality survey data. The platform offers a variety of question types, from open-ended text boxes to customizable scaled responses. Beyond that, quantilope has pre-programmed survey templates that ensure all necessary questions are included and phrased in the correct way.

The layout of quantilope’s survey platform is built in a ‘gamified’ manner, making the survey user experience fun for respondents - with images, interactive modules, and more.

quantilope’s qualitative tool, inColor, allows respondents to share their thoughts verbally via video uploads. Video footage of consumers speaking about their opinions in their own words is one of the most impactful ways to understand consumer insights without question bias.

To learn more about creating reliable questionnaires with quantilope, get in touch below:

Get in touch to learn more about preventing acquiescence bias!