What's the value of a Super Bowl ad?

Each year, brands across all sectors allocate millions of ad dollars to secure a coveted Super Bowl commercial. For some, the 30-second spots have created memorable brand moments while others are left to wonder if the hype is worth the buck.

In an effort to measure the effectiveness of Super Bowl ads, quantilope ran a study investigating the performance of soda commercials during this year's sporting event to see who came out on top in terms of brand recall, ad recall, and overall appeal. The research surveyed 290 US consumers who watched Super Bowl LIV and it’s commercials, with an focus on Pepsi, Coca-Cola, and Mountain Dew.

In an unaided awareness test, Pepsi was the most remembered soda brand to show a commercial in the Super Bowl this year. When asked to list all of the brands they remembered seeing a commercial for, nearly 25 percent of viewers recalled seeing a Pepsi ad compared to just 5 percent for both Coca-Cola and Mountain Dew. However, when prompted with a specific brand, 61 percent of viewers could recall seeing a Pepsi ad, 39 percent recalled Mountain Dew’s ad, and 36 percent remembered seeing Coca-Cola’s.

Regardless of Pepsi’s strong awareness, viewers were significantly less likely to remember the actual ad itself, especially in comparison to Mountain Dew. When asked how well they remembered the content of each ad, 43 percent of viewers who saw Mountain Dew’s ad could confidently remember the premise of the brand’s The Shining spoof compared to just 30 percent for Pepsi’s Missy Elliot ad, and 24 percent for Coca-Cola’s Jonah Hill and Martin Scorsese party texts segment. Similarly, Mountain Dew had the highest performing ad in regards to likability. Sixty-three percent of viewers had a strong positive reaction to Mountain’s Dews ad compared to 53 percent towards Coca-Cola and 49 percent towards Pepsi. 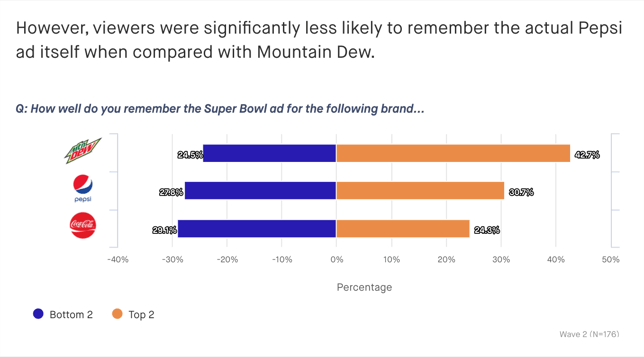 At the end of the day though, the real value of any ad comes down to it’s impact on sales. And once again, Mountain Dew won the game with a slight increase (6.5 percent) of Super Bowl viewers who reported their likelihood to purchase the brand’s products after watching the Super Bowl.