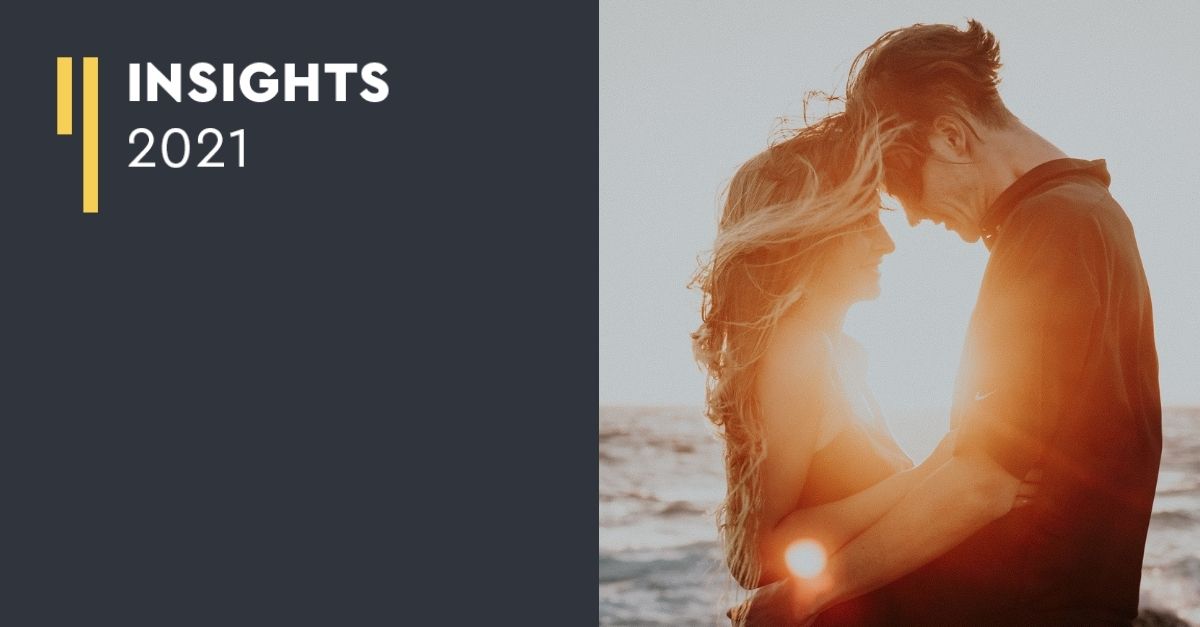 In a recent study, quantilope identified the fundamental principles and values of consumers. For companies, the results provide essential and useful information about their target group and the insights can be used to inform communication strategies.

People strive to act in accordance with their principles and values as much as possible. If they do not do so, cognitive dissonance arises, a term that comes from social psychology and describes an emotional state that is perceived as unpleasant and which people generally try to avoid. Cognitive dissonance also plays a role in purchase behavior. For example, consumers who are very concerned about social justice are more likely to buy products that promote equality.

As part of quantilope's Consumer NOW Index, a monthly tracker of attitudes, needs, and purchasing behaviors, respondents are asked to select the three principles (e.g. safety, traditions, success) that are most important to them.

The 'Big Picture' – a happy relationship is top priority

Consumers were focused on their relationships in Q1 2021, with nearly half (45 percent) selecting ‘a happy relationship’ as a top principle in life (Fig. 1). Following this top principle was ‘living an honest and respectable life’ (38 percent), ‘safety and security’ (37 percent) and ‘making my own decisions’ (35 percent). 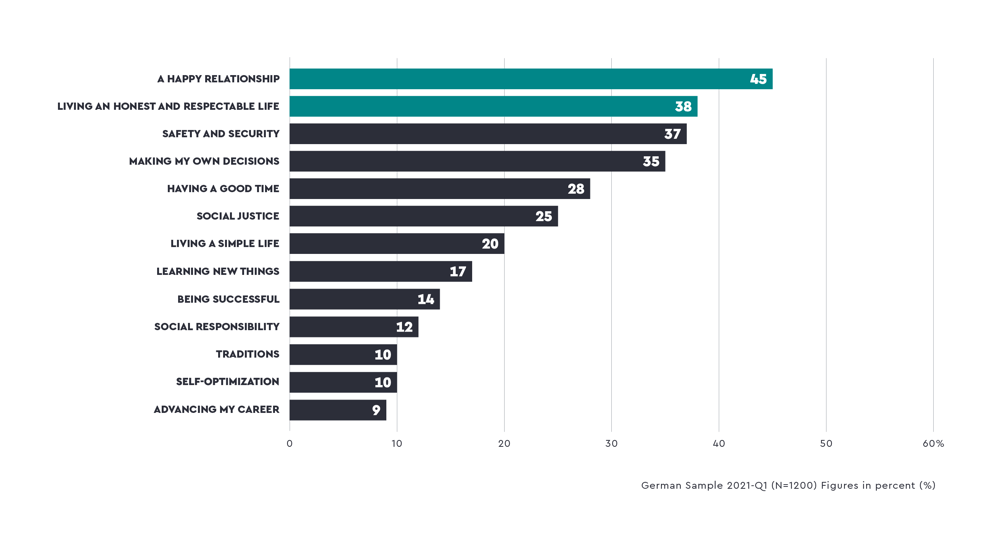 Brands who consider these top consumer principles in their advertising and communication strategies have a great chance of being well-received by consumers, since the majority can identify with them. For example, a TV commercial showing a harmonious partnership will appeal to consumers who prioritize a happy relationship. Additionally, products claiming to cater to safety and security needs will likely capture interest among consumers who prioritize those values. Focusing on top consumer principles is one way companies can better understand their target group and address them accordingly.

The importance of principles proves to be relatively stable over time. Since the start of tracking in July 2020, the top five principles remained on par month-over-month. Only ‘social justice’ and ‘living a simple life’ indicate change over time. Fig. 2 shows a downward trend in the importance of social justice, while ‘living a simple life’ trended up. 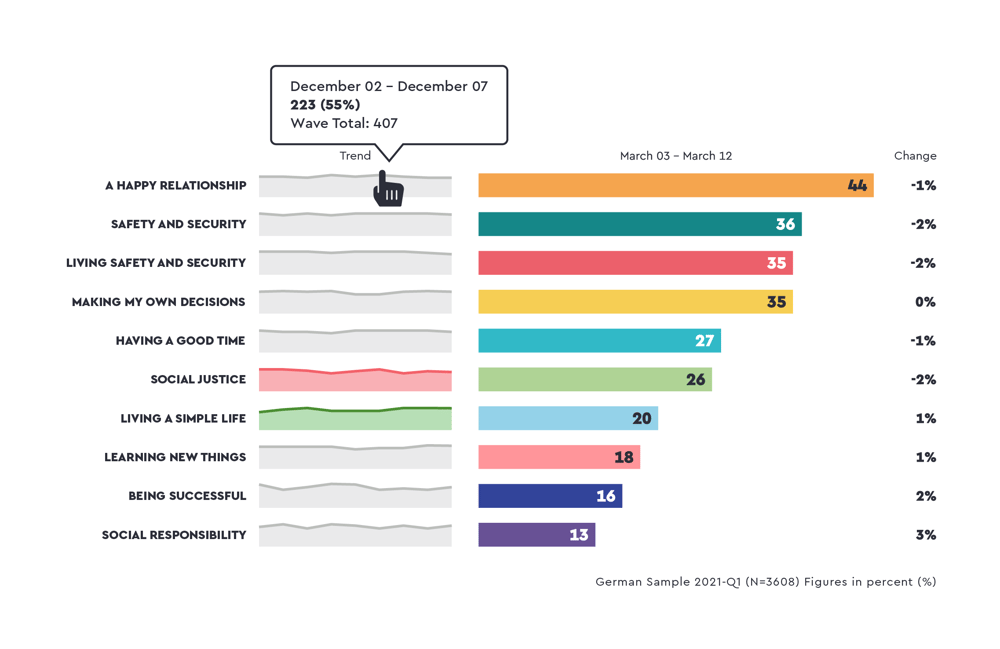 To sum it up, values and principles are stable over time, and companies can benefit from paying attention to these aspects of their consumers (especially how they may differ among various target groups). In doing so, brands can successfully align their marketing and communication strategies to the appropriate audience.

Differences in principles due to relationship status & income

When it comes to principles among different relationship statuses, it is most important for singles to ‘make my own decisions’ (41 percent), while those who are married would rather prioritize ‘a happy relationship’ (57 percent) (Fig. 3). 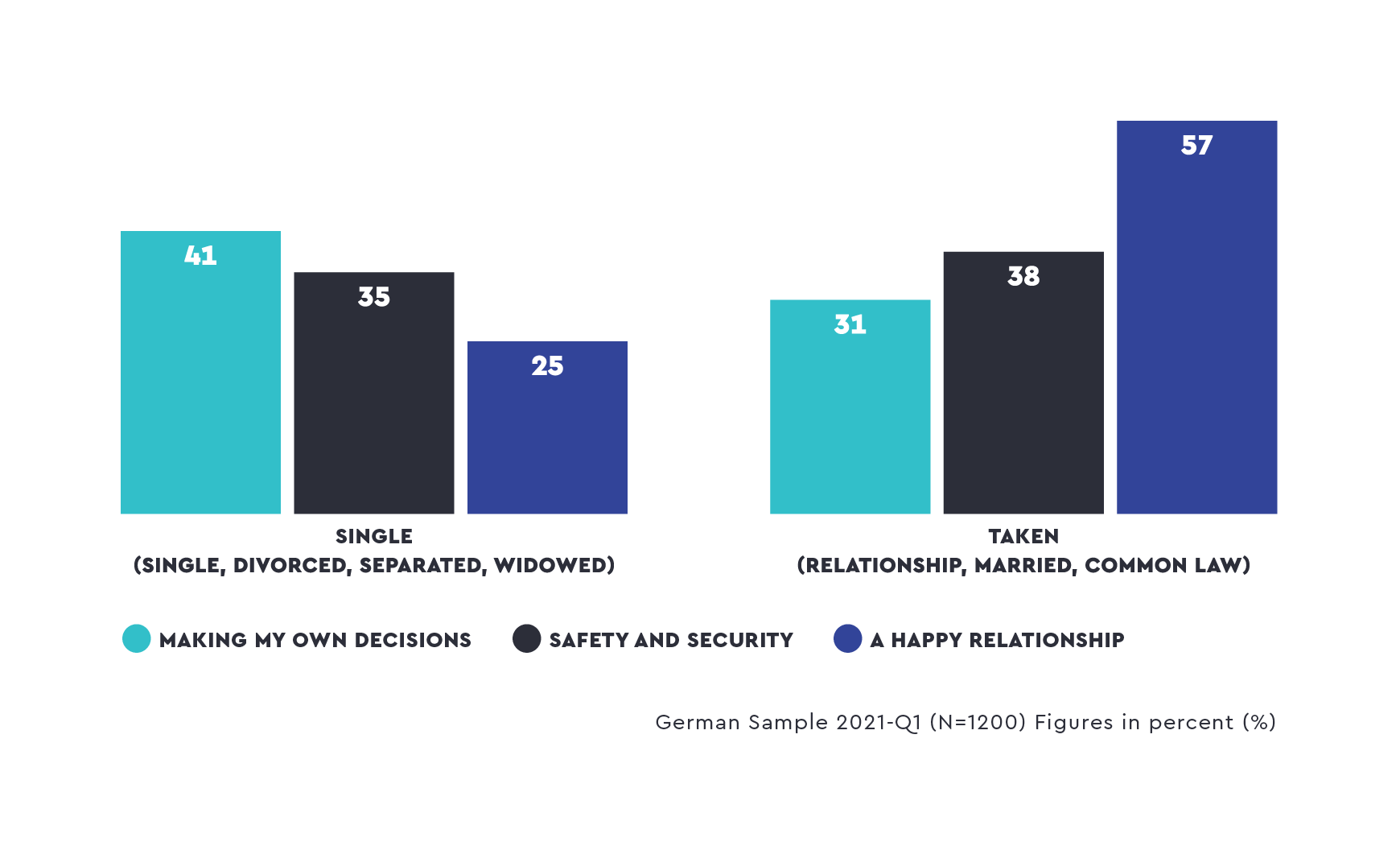 Income also plays a factor in the varying importance of principles. Consumers with a gross monthly income of less than EUR 1,300 find it most important to ‘make my own decisions’, while those with incomes of EUR 1,300 and above say ‘a happy relationship’ is most important (Fig. 4).

Generation X focuses on an honest and respectable life

There are also some generational differences when it comes to top priorities in life, though ‘a happy relationship’ is a top priority for almost all consumers (Fig. 5). This principle especially stands out among Millennials (25 to 38 years old), far exceeding the importance of any other principle (48 percent).

As for Generation X (39 to 54-year-olds) ‘living an honest and respectable life’ is just as important as ‘a happy relationship’ (45 percent and 44 percent, respectively). Driving this metric is Gen X women, who consider ‘living an honest and respectable life’ significantly more important than Gen X men (52 percent vs. 39 percent, respectively).

Additionally, Generation X, as well as Boomers (ages 55 to 70), place significantly higher value on ‘safety and security’ (40 percent each) compared to younger generations (32 to 34 percent for Gen Z and Millennials).

And speaking of Boomers, this is a generation which stands out for their emphasis on ‘making my own decisions’ (45 percent). In fact, female Boomers were particularly likely to cite this principle as one that is important to them (51 percent), while male Boomers chose a happy relationship at the top (51 percent). Additionally, ‘social justice’ is more important to Boomers (33 percent) than it is to younger generations (21 to 26 percent). 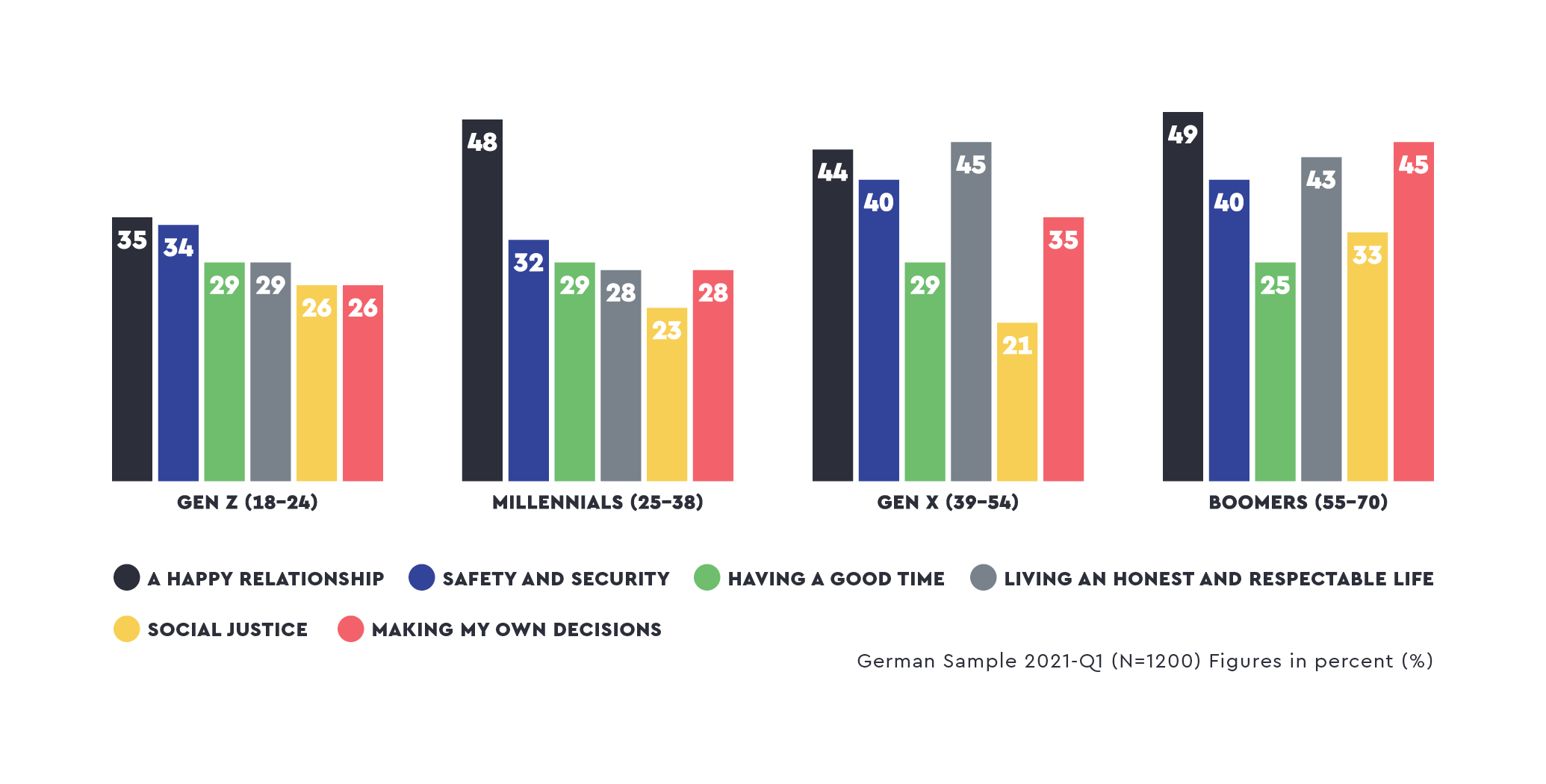 Detailed target group analyses at the push of a button

quantilope's end-to-end platform makes it possible to implement in-depth target group analyses intuitively, and at the push of a button. The examples shown in this report are just a few examples of the many insights that can be quickly generated with just a few clicks.

Additional insights around consumer sentiment and behavior in Germany can be found in the interactive Consumer NOW Index dashboard, updated on a monthly basis:

We recommend opening the dashboard on your desktop.

About the Consumer NOW Index

quantilope’s Consumer Now Index surveys around 400 participants aged 18 to 70 every month. The survey is nationally representative in terms of age, gender, and region. An extract of the most important results is published and automatically updated in the Insights Dashboard.

Stan Sthanunathan joins quantilope as a strategic board advisor